The Exerpeutic Folding Upright Bike was designed to help you get into the best shape of your life! You don’t need a gym membership, super fancy equipment, or to drop thousands of dollars on an amazingly versatile, inexpensive, yet feature-packed piece of fitness equipment.

All you need is an upright stationary bike, like the Exerpeutic Folding Upright bike. You can literally pedal away the pounds and get an unbelievable workout that will give you the health, weight loss, and fitness results you’re looking for.

Quick Navigation
Who is this for?
What’s included?
Overview of features
Get the most from your exercise bike
Alternative Product
Conclusion 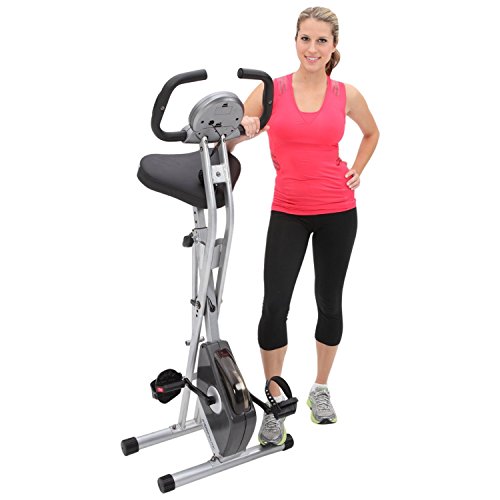 With over 5,000 positive reviews from regular people such as yourself, you can be confident that this Exerpeutic Folding Upright Bike will do everything it claims to do – and more. It’s built for 20- or 30-minute workouts, and it works both your upper and your lower body at the same time. It’s like taking a stationary gym bike and bringing it into your home.

What you see is what you get, so there aren’t any complicated instructions on how to use it. You probably remember riding your bike as a kid? This is the same concept. The wheels are just gone! Using the Exerpeutic Folding Upright Bike is just as easy as getting onto a two-wheeled version.

Who is this for?

Upright bikes like this model from Exerpeutic are so simple and uncomplicated both in form and function, that there are millions of people who would benefit from using them. This one is a foldable model, folding to at least half the size when it is fully assembled. That makes it ideal for people with small spaces, those who want an upright bike for the office, and for recreation rooms, condos, and apartments.

Both men and women can derive great satisfaction and results from using this upright stationary bike. It’s easy enough for teenagers to use, too, provided they meet the height requirements, listed below.

Seniors who want to keep pedaling into their golden years will also enjoy using an upright bike. It provides a low-impact exercise that’s especially gentle on arthritic knees, aching hips, and creaky joints. No matter your fitness level, you can start on an easier tension and then work your way up.

The seat cushion can be adjusted to fit anyone between the heights of 5’3” and 6’1”, and safely up to a maximum weight capacity of 300 lbs., so anyone outside of those height and weight requirements wouldn’t be able to use this bike.

In the box, you will receive the exercise bike itself. It comes mostly assembled, although there are a few parts that you have to put together. That is fairly easy and straightforward. Since this upright bike is foldable, it doesn’t take up a lot of space. You get the instructions, and you can purchase an extended warranty for parts if you want, too.

One of the most cumbersome features that comes with a stationary bike its weight; these aren’t light machines. But this Exerpeutic Folding Magnetic Upright Bike has managed to eliminate that problem and features a streamlined, sleek design. It measures 31” long, just 19” wide, and 46” high.

The weight is 42.8 pounds. You don’t need to do anything special to fold it, either – just move it against the wall and fold it. It’s easy to set up from the folding position and just as easy to put back for storage. When you need to roll it to another room, there are included transportation wheels.

This is a magnetic bike, so it has a built-in 8 level magnetic tension system. You adjust it yourself using the knob. We suggest you start on an easier tension, and then work your way up to stronger resistance. There are hand pulse sensors to monitor your heart rate, and a three piece ‘high torque’ crank system. The ‘double drive’ transmission system makes this machine relatively quiet and reduces vibrations, even while you’re pedaling at high speeds.

You get a nice big 3.3” x 1.5” central LCD computer screen to read your stats. In large numbers, it will display your distance biked, calories burned, the time you’ve been biking, your speed, a scan, and the heart rate monitor. The large seat cushion supports people of many sizes, and it’s nice and comfortable with foam.

Some missing features include cup holders, a seat that’s not just padded but contoured, and pre-programmed workout schedules. It would also be nice to download your stats to a phone or computer, so you can track them.

Get the most from your exercise bike

Pedaling on an upright bike is just as fun and easy as on a regular two-wheeled bicycle. Set it up on the floor, preferably on a thin rug to reduce noise and vibrations even more as you use it. Seat yourself on the padded seat, and make sure it’s been adjusted to the height that you need. Place each foot in the pedals and strap your shoes in. Put your hands on the handlebars. That’s it – so easy to get set up.

Once positioned, start pedaling forward. To burn more calories, you want to pedal at higher speeds for longer periods of time, interspersed with lower speeds.

Would you like a comfortable recumbent bike instead of an upright model? Then choose the Marcy Recumbent Exercise Bike. It’s in the same price range, has a supportive back rest, cushioned seat, and also gives you a great workout as you pedal. Recumbent bikes are even easier on your joints than upright bikes, so they’re great for people who have pain or injuries.

Upright bikes have been a commercial gym fitness machine staple for decades. Their popularity only continues to grow because they are affordable, easy to use, and most people are shocked at what a great workout you can get from such simple equipment. The Exerpeutic Folding Magnetic Upright Bike combines all the awesome features of a stationary bike in a streamlined, yet sturdy design you’ll use for months to come.

Best Exercise Bike for Large Person up to 500lbs Plus